Time flies and other cliches that turn out to be true

Back in January, I told you about how I finally unlocked the secret to a daily writing practise, which turned out to be a lot of intervention and advice from others, along with some good old fashioned sitting the hell down and getting to it, and not a moment too soon, as part of my work in February included teaching a course on writing and procrastination, the aspect of writing in which I feel the most qualified. I was high on my writing practise and what it was yielding. It was great.

And then I hit a rough patch with my story, where I tried to force it to go forward when what it really wanted to do was keep on spreading out to the sides, and the writing practise became less great, though it remained steady. And though my imagination was tapped and my mind was really longing for a break, my sense of…what, shame, maybe? about my laziness kept me chained to my desk, trying to grind out my story.

Not, it turns out, an optimal way to approach art.

And since my mind is kind of an asshole sometimes, my body has to get involved to get my attention. This time, it did so by putting my mid back into spasm. It was very terrible. I thought it was from gripping my pen too tightly (why am I so intense, I whined to Kev. Why can’t I just let go? Why indeed.), as if that would do it, but when I explained my situation to the first of many body workers who saw me during the awful early weeks of March, telling her that for about a hundred and twenty minutes a day, every weekday, I’d been sitting on a slowly deflating yoga ball, with my notebook on my knee, curled over writing by hand…It became clear that this was a case of abject stupidity, rather than artistic intensity.

It’s funny how that goes. You think you’re one way, but then you get to a mirror and see that you are in fact another way altogether.

And so, I was forced to take a break. Forced to stop forcing it. Forced to acknowledge, once again, that my body is not just a kickstand for my brain. That it is, in fact, the place in which I live.

One of the other body workers I saw during the Great Back Spasming asked me about my emotional state. Oh, I said, I’m pretty good. There’s nothing really going on. Although…I have been writing, which as a way of stirring up shit. Then she asked about my confidence. Again, I was cavalier to start. I generally have rather a lot of confidence. Too much, even. Although…I have been outside my comfort zone every day of the last fifteen months. Huh, she said. Huh, I said.

And so, this time has also been an invitation to consider my relationship with praise, and what “doing a good job” actually looks like for me in this new incarnation. There’s a mental work out. It involves a lot of positive self-talk about stuff I know I’m good at, like making a risotto that can make even the toughest critic cry in gratitude, for instance. It makes me feel like a dope. But it doesn’t make my back hurt, so there’s that.

I’ve also been spending a lot of time contemplating this photo: 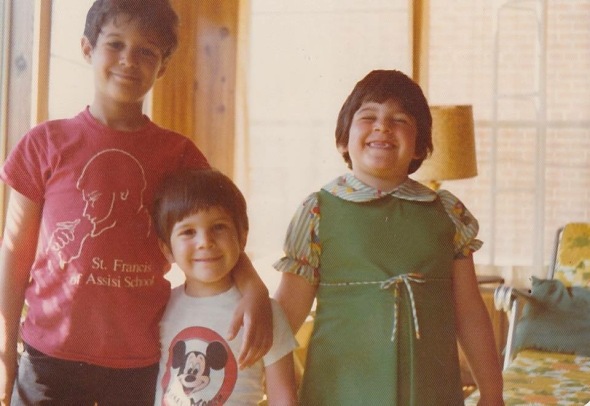 I would say this was taken in perhaps 1976. I really don’t know what to make of myself here, and how exactly it’s connected to confidence, my emotions, writing, my back spasms, body-as-brain-kickstand, praise, grinding it out, and so on. But I’m pretty sure it is. This was back in the day when my Italian grandfather was giving me and my brothers the same basic haircut, and I was still toothless from a neighbourhood Evel Knievel incident gone horribly wrong. This was also back when I thought I might grow into good eyesight, just as I would some day grow adult teeth. Somehow Chris and Jeff are smiling proportionately to the occasion, but I…I am really somewhere else altogether.

I think I’d like to go to there. I may have to go sideways to arrive, instead of forward. That’s never been my preferred route, but preferences can change. I hope.