← No dress rehearsal
Years ago →

Oh hi. Sorry about that protracted absence. Spring passed in a whirl of travel to Toronto and Edmonton and Toronto again. And then things bloomed in the garden and I got kind of distracted. 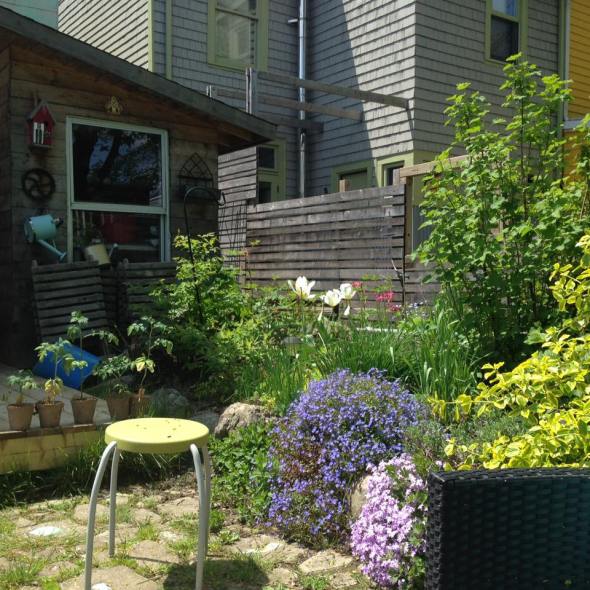 Right? That is totally distracting…and that’s from, like, six weeks ago. I’ve been to Toronto then to Chicago, back to Toronto, then back to here, then to Cape Breton, then back here since then. I bought a new car. And a new washing machine. It’s been busy. And the garden is even more intense now. I’d show you, but I fear you wouldn’t get anything else done today. I’m just looking out for you.

In Cape Breton, I was fortunate to read at the Margaree Canada Day writers’ festival, alongside Michael Winter, Sarah Faber and Kate Beaton. What marvellous company. The library was crammed with fans of the written word and it was a truly great day. A lot of people let me know they’ve been missing me on CBC radio. That is so kind. I must tell you that I am so happy now. Thank you for liking my company. Consider hanging out with one of my books!

Speaking of hanging out with one of my books, I’ve been taking my own advice on that front and have been digging in to Good Birds Don’t Fly Away. The trip to Chicago was huge. Even though my sister and I had only a couple days in the Windy City (we didn’t even have time to find a good purveyor of sterling silver so Donna could do her thing, sadly. Next time for sure.), it was enough for me to realize that the dinosaur part of my brain was absolutely right in serving up Chicago as the setting for this book. What a relief. I had a number of small profound experiences that I have been chewing ever since. I found her neighbourhood…and maybe even her exact house. I found a couple of likely downtown movie theatres in which a shooting could occur. I found so many explorable metaphors in the way Chicago reinvents itself, and in the ways the developed city lives cheek by jowl with nature and works to control it.

The other thing that has kicked open the door to writing this book is the time I’ve been spending with a friend who’s been telling me about PTSD. “Of course,” he said during a recent visit, “your character has PTSD.” Of course she does, obviously, I said, though it had in no way been obvious to me. But with his help I’ve been exploring what this character’s trauma looks like (and smells and sounds like!) and it’s been helping me figure her out. And the writing that is coming out of that feels like it is going to take me somewhere. Such a relief after months (years?) of not really knowing how to unlock the door to this book.

It feels like the door is unlocked now. I am tiptoeing through it. That’s why it’s been so quiet around here.