Light in the dark

Winter skies—late fall skies, I guess they have been lately, though the thick crust of snow below them sure reads winter these days—are a gift. They are a complicated, sometimes prickly gift, one you’re not sure you want, actually, if it has to come with certain conditions, like snow, wind, slush, ice. Treachery, danger, discomfort at least. And yet, those skies, the colours they offer a brilliant relief from the gray scale of the day, more than a spoonful of sugar helping the medicine go down, in the most delightful way.

The light they bracket is short and oblique, and if you’re awake for more than eight or nine hours a day, you’re going to see more than your usual share, probably, of sunsets and sunrises. In the last few days, I have nervously anticipated the setting of the sun for the darkness that will fall on the highway I’m travelling soon afterward, but despite that nervous anticipation, a glorious display across the horizon has helped to lift anxiety about what’s ahead, if only for a moment. 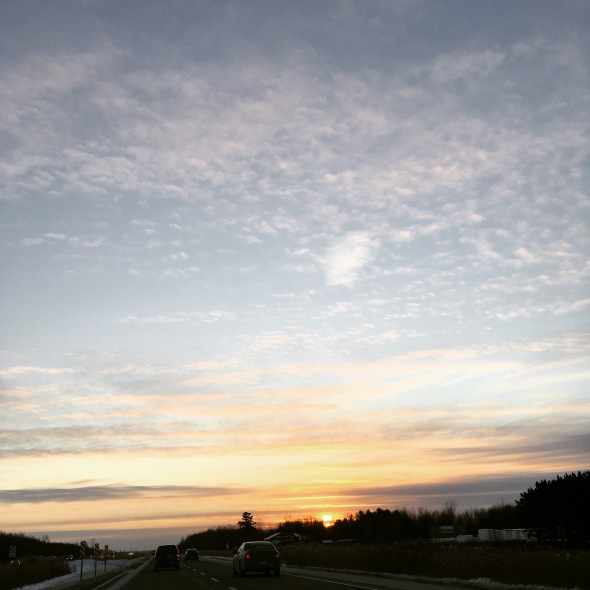 And I’ve been chased out of bed before dawn by a brain that won’t stop offering me bits of work to think about, conversations to construct or reconstruct, errands I keep forgetting to do, kindnesses I should have extended, battles I should have fought or stayed out of, unease about the future, large and small. I’ve generally been fortunate in my relationship with sleep, especially since I stopped working for The Man. As a self-employed person, I can always get more sleep, and generally, I can choose whether to do something complicated or put it off till I feel more rested. I have not been called upon to operate upon a brain or heart, and so, a few nights of less than optimal sleep brings along pretty low stakes. And when you get out of bed early, you see sunrises that are so lovely you exclaim out loud in a quiet house, and creep out onto a snowy deck in your slippers to luxuriate in it for a moment and snap a picture. 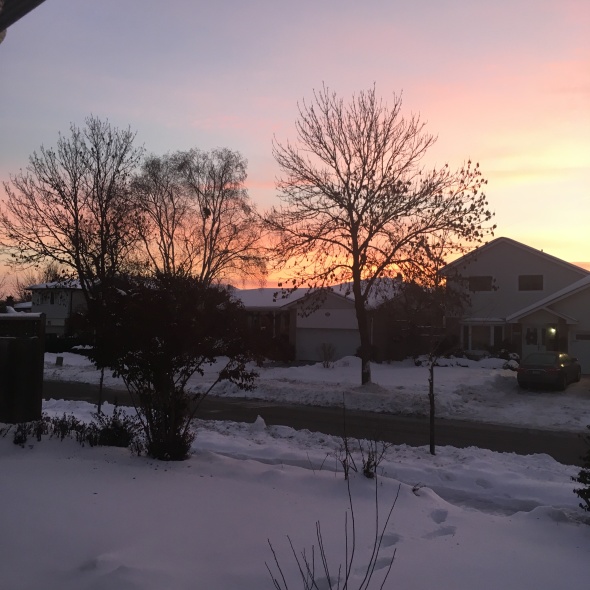 But there is the dark to be reckoned with. So much dark, the most we’ll have this year descending today. And this year has been legendarily replete with dark of all kinds. I have been grateful to have been freed, professionally, from the bonds of having to know what the news is. I have been privileged to be able to turn away, if I need to, from scenes of war and violence, injustice and despair, from racism and sexism played out in streets and communities and halls of legislation. I have had a series of bad dreams in which I am being directly sexually harassed or assaulted by Donald Trump and have shrugged my shoulders in the dream, acknowledging that this is how it is now, and what are you gonna do. I have scrolled quickly past stories about climate change and its ravages, as if it is only my eyes on it that will make it true, and so long as I don’t look, it doesn’t exist. This is incredible privilege. For the dark is real and it is all around us, whether I’m choosing to look at it or not.

This has been a year of peeling back the layers of myself, chipping off the exterior that allowed me to do a pressure-filled job in a witheringly public way. My ability to compartmentalize was almost the most important skill in my quiver, to subdivide myself into selves, to put fear, criticism, shame, uncertainty, anxiety, heart, humanity in separate trunks in my head and slam them shut so I could function on live radio. Freed from that I have discovered that the trunks do not slam shut as easily anymore, nor do I want them to. This year especially, I have been easily moved to tears by displays of humanity and kindness and by displays of inhumanity and cruelty. I am, basically, a single kind or cruel word away from crying at any given time. And though it is, to be honest, inconvenient to be so close to the surface, I want to encounter those layers of myself, sift through my experiences of vulnerability and what I can take from them, leave myself open to criticism, but also to acceptance—both from within and from without. The darkness is real and it is inside us, too, whether we are choosing to look at it or not.

But the light is real too, so real, and it too is all around us. Is it harder to see with the darkness so pressing, or are we fatalists, inclined to believe the worst and to share the worst with each other? Why can’t we see the light as easily? There is the light that’s corny and a little trite, the light that is advertised as “heartwarming,” but those stories in our newsfeeds can feel far away and artificial, or like some special effort made by someone we don’t know, not applicable to our own lives, and hardly a counter to the enveloping darkness anyway. 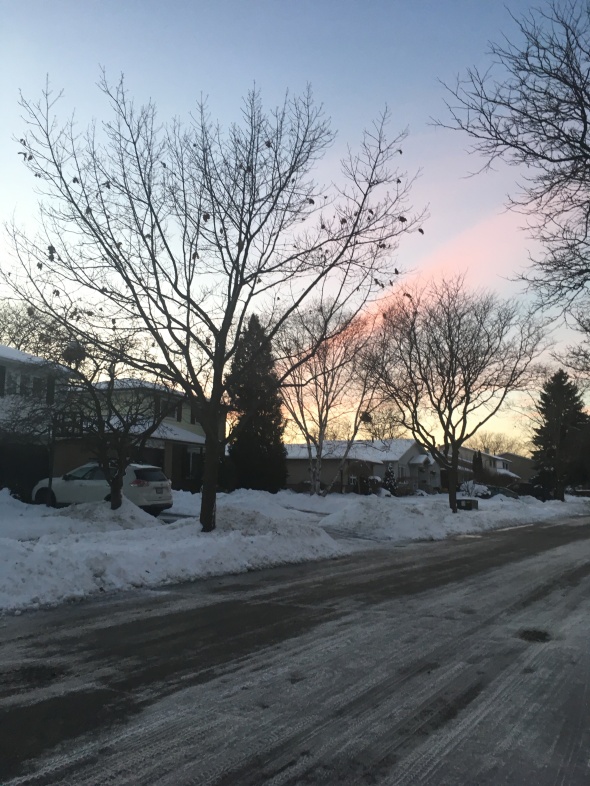 And yet. There is a crack in everything, it’s how the light gets in. (A world without Leonard Cohen, talk about darkness descending.) The light can be the smallest glimmer. The ease with which my little nephew talks about what scares him and relieves the fear by bringing it into the light a little. An extra moment of conversation with someone who’s clearly overworked or otherwise harried—a moment of pure humanity. The grace with which my spouse agrees to be the anchor in a night of family holiday singalong-ing, which is not a role for which he’d ever volunteer, but when faced with a sentimental spouse on the verge of tears over I Believe in Father Christmas, he steps up. The ordinary citizens who have become galvanized to fight for justice, risking their lives, their comfort, their own ability to turn away from what’s uncomfortable. Circles of friends who truly form a circle, of shelter and support and love, always. Open-hearted people of all kinds who open also their arms, their minds, their lives in service of a better life for others. There is so much light. Sunrise, sunset. Look for it. Be ready to see it. Be ready to be it. Happy solstice. Welcome, winter

It’s been a year. I regret nothing.

What a time it’s been! November passed in a blur of airports and timezones and visits with nieces and nephew, mother and siblings, aunts and uncles and friends. I travelled from Halifax to Toronto in early November and from there on to San Francisco and Half Moon Bay, to oversee the gorgeous launch party for this remarkable book. Then back to Toronto for some family time before once again heading to the west coast, this time to Victoria, BC, for a company retreat, and then finally back to Toronto to see my nephew perform in a production of Seussical Jr, which was pretty much the best thing that’s ever happened to me.

And then finally, two days in the car and I’m back home in Halifax, a little tired, but pretty satisfied overall.

First, San Francisco has long been on my list of places to go, and it was just so great that Katy wanted to have the launch for Movement Matters in nearby Half Moon Bay. I drove the Pacific Coast highway, ate an artichoke omelette in Pescadero, got soaked by the ocean, walked San Francisco’s streets for hours, ascended the staircase at City Lights bookstore, imagining all the hands that had held the handrail before mine, sat in the Poet’s Chair and looked out the window and thought about this life, and how every day it falls into place a little more clearly and a little more perfectly. I ate a burrito in the Mission and I sat in Dolores Park and basked in the sunshine. I made a list of things to see and do next time, and began scheming about how to make that next time happen, with Kev in tow.

Then, the retreat in Victoria. This almost-year of working with Propriometrics Press has been transformative in many ways, but the weekend we five spent together in Victoria was a whole other level of transformative. So great to spend face to face time with colleagues I hang out with for hours a week online, and to discover that we all really love each other in person. I learn so much from these colleagues, about the work we’re doing, and about the life it’s possible to lead. Plus, the Pacific Ocean was in our front yard, and we ate foraged madrone berries on our walks, and there was a cozy fireplace, and we laughed so hard we stopped making sound. It was perfect.

And of course, the family time. It was a glorious month of seeing my people just about every day, tagging along to my sister’s jewellery

shows, making dinner for my mom, walking to meet my niece and nephew on their walk home from school. And the jewel in the crown of all that was the boy’s outing as Wickersham Brother 2 in Seussical Jr. The Nephew reminds me of myself at his age: a little anxious, kind of scared of everything, feeling like everyone else knows the score, a bit dreamy, a singular worldview. I buried myself in books, he chooses video games. I tried to hide being anxious and scared, he speaks of it freely, in a way I admire so hard. He told me regularly during our visits that he was scared to go on stage and perform, that he was concerned that he had missed a rehearsal in which everyone else learned the first part of one of the dances, and that he’d never had a chance to catch up. He told me on Thursday night, as I drove him to his dress rehearsal, that he had never before wished the weekend wouldn’t come. But at the theatre he was comfortable, at home, more himself than I’ve ever seen him.

And on Saturday night, when the curtain finally went up and he came on stage in his little denim vest, with monkey ears adorably askew, I started crying with happiness and didn’t stop till the final ovation ebbed. He friggin’ nailed it. He danced, he sang, he projected, he smiled with his whole heart. He overcame that fear…or he felt it and went on stage anyway. I love that kid.  So much.

As for me, it’s coming up on a year since I left my work at CBC behind. I continue to not regret it for even a moment. I did not feel fear when I gave my notice, and I haven’t felt it in the almost-year since I embarked on this new life. The kind of smile I saw on my nephew’s face on Saturday night, that’s the smile I feel on my own face every day. This life is where I am comfortable, at home, more myself than I’ve ever been. 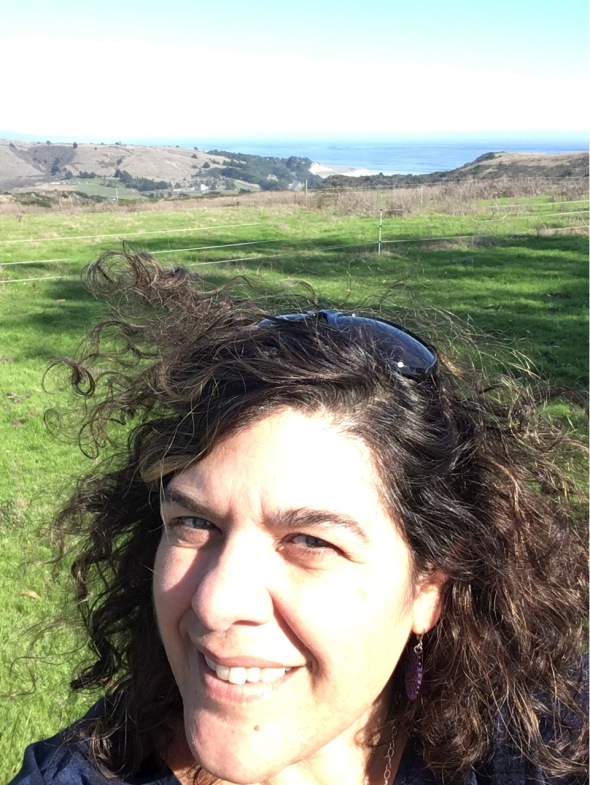