We hit the road at seven in the morning yesterday and drove across the landscape Lansing and Evan and Dacey travelled in the pages of Fallsy Downsies. We pulled over between Sackville and Moncton, where Lansing developed a hate-on for journalists, to take a call from the radio station in Guelph about my launch there on Tuesday night. We encountered just the merest bit of bad weather and traffic tie-ups, and with a second wind each, we decided to press on, doing the drive in one straight shot. Eighteen and a half hours later, we pulled into the driveway at my mom’s in Mississauga and I exhaled the way you do when you get home.

And in a couple of hours, we’ll head down to the Belljar Cafe in the Junction for the Toronto launch of Fallsy Downsies. I am excited to see friends and family and others, and to introduce them to Lansing, Evan and Dacey. And I’m almost blacked-out with excitement about wearing this amazing charm bracelet made by my equally amazing sister: 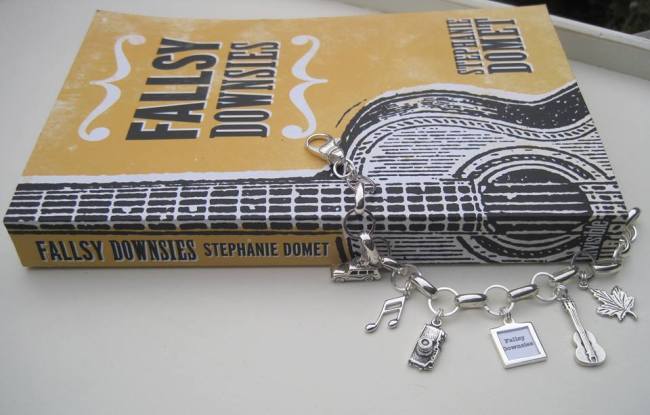 If I’m not the luckiest, I’m sure I don’t know who is.

The other day I raced from the office home to pick up my reading copy of Fallsy Downsies and put on some mascara. Then I whipped over to my publisher’s house to pick up him and a box of books, and set out for the Keshen Goodman Library to make a seven pm event. “How was your day?” Robbie asked.

He nodded. Robbie has this way of letting your words just hang there till you hear them. Finally he said, “Is it because, you know, you’re kind of rushing around right now?”

I have been Rushing Around Right Now for weeks, it seems. I’ve had all of five nights off this month. Here’s something I’ve discovered: that’s not enough nights. On the one hand, I love launching this book, taking it hither and yon, reading from it, meeting readers and booksellers and librarians and living that life. On the other hand, full time job that’s absurdly demanding.

I am a stuttering, stammering, rough-voiced shell of my former self.

But I couldn’t be happier, to be honest.

Fallsy Downsies is in the world, Lansing Meadows lives. Next week, I get to take him on tour, where he’s meant to be. We go up to Ontario and back in a week and a day. In mid-December, we hit Fredericton on December 14 and Wolfville on December 15. I am so grateful to those who have asked me to come read in their space, and those who have eagerly agreed to host me when Invisible has floated the idea.

My house is a mess — there are no fewer than three bouquets of dead flowers on the main floor alone — the laundry is undone, I eat dinner at 10pm not because I’m fancy but because that’s when I get home. I am exhausted, every minute of every day.

Okay, so, my characters are very alive in my head. I see them clearly — the way they hold themselves, how they walk, the funny little verbal tics, the way their hair falls in their eyes or stands straight up or whatever it does. So the other night, when I was checking Twitter, my stomach swooped like I was falling in love when I saw a familiar name in my mentions.

Turns out Dacey is an Albertan teenager who’s crazy ’bout curling. And also looks a lot like my Dacey Brown. Younger, of course.

So naturally I searched Evan Cornfield — and found two of them, though neither is very active. And I searched Lansing Meadows, too.

November has been busy so far, between various political scandals, and teaching my first-ever writing workshop. I was at the lovely Tatamagouche Centre last weekend, with a group of eight or nine writers all interested in kick-starting their fiction-writing practise, many of them committing to the insanity that is NaNoWriMo. It was really great to be with people who were in the early, fevered stages of writing, their eyes shiny, their hair standing on end after every writing session. Really inspiring. And I may have, totally by accident, started writing something new.

The less said about that the better, at the moment.

Because there are busy Fallsy Downsies times upon us! My tour begins in just a few days. Wednesday, November 13, I launch in Truro at the library. The following week, I’m at the Keshen Goodman Library on Tuesday, November 19 and at King’s on Thursday, November 21, and I do hope you’ll come see me!

But before all that, the excellent Andrew Kaufman is coming to town, and you should meet me at the Spring Garden Road Library next Tuesday, November 12 at 7pm to hear him read from Born Weird, his latest and most amazing novel.

Can we call it a date?

I seem to have inadvertently begun writing a new novel.

All I set out to do was keep up with the participants in the writing workshop I’m teaching this weekend, and bam, just like that, a spark got lit.